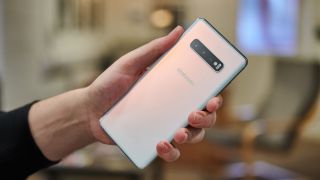 It’s almost surprising that the Samsung Galaxy S10 range doesn’t already have Android 10, given that they’re Samsung’s main flagships, but the wait for the update should almost be over. In fact, if you’re in Germany it already is.

If you don’t live in Germany you might still have to be a bit patient, but the fact that Android 10 is now landing there suggests it will come to other regions very soon. So keep an eye out for a software update on your phone.

It should be worth the wait too, as Android 10 includes some substantial updates, such as a system-wide Dark Mode, Digital Wellbeing tools to help monitor and minimize your device use, and improved privacy controls.

On top of all that, Samsung has made some changes to its One UI skin that it lays on top of Android. The changes here don’t sound as drastic but should be for the better, as they include things like a more detailed battery use graph and more ways to access one-handed mode.

Even once all Galaxy S10 range handsets get the Android 10 update that will still leave many major Samsung phones without it, most notably the Samsung Galaxy Note 10 range, but we’d expect they’ll be next in line, so stay tuned.