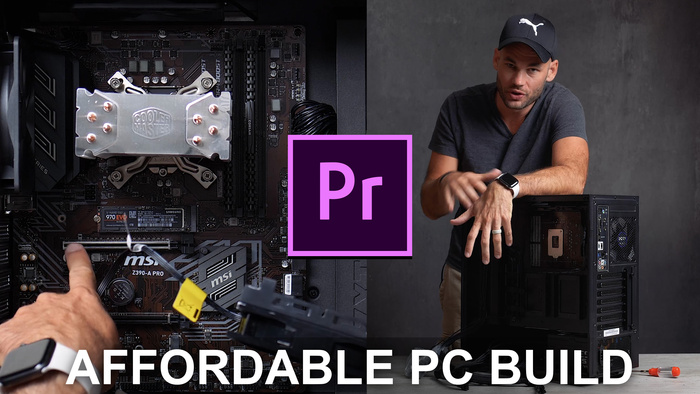 Last month B&H helped us build an extremely expensive workstation. Today, we built a computer that rendered footage faster in Adobe Premiere for 1/3 of the price.

Our last build cost around $3000 for the computer alone, but I warned everyone that many of the expensive components in our build might not currently show any performance increase over much cheaper alternatives. Maybe in the future Adobe software will take better advantage of extra cores, or more advanced graphics cards, but that the moment, they don’t. For this reason, you might be able to get incredible performance out of a relatively affordable PC.

Most of the readers of Fstoppers.com are photographers or videographers so I will be building this PC based on the performance in Premiere, Photoshop, and Lightroom. The most trusted website I have found when it comes benchmarks for hardware in Adobe programs is Puget Systems. Before you build a machine, check out their blog posts and tests comparing every major piece of hardware.

AMD has recently released some enticing CPUs and GPUs but Puget’s tests have shown that Adobe still seems to work better with Intel hardware. This may change in the future, but this is why we decided to stick with Intel and nVidia components.

My goal for this build to was to stay Under $1300. I think I spent right around $1200 but if you purchased some of these components on sale, or you swapped out some items like the M.2 drive for a cheaper brand, you should be able to build this for around $1000. Let’s get to the components.

This processor is a great balance of price and performance. It has six cores running at 3.7Ghz. At less than $300, it’s very affordable and may perform identically or even faster in Photoshop or Premiere with chips three or more times the price. This CPU is a whopping $730 cheaper than the one we used in our last build.

In our expensive build, we used a $200 water cooler that looked great, but was a pain to install. This cooler is only $30 and some say does a better job of cooling than a water system.

At around $130, this motherboard is a bargain. It has 4 ram slots that will allow you to add more down the road, and it still has USB 3.1 Gen 2 and USB C. The only complaint I have about this board is that it doesn’t have wifi built in. If you need wifi, you’ll have to use a USB adapter.

Most photographers today do not need more than 32GB of ram but I made sure to get 32GB in two 16GB chips, so that I would still have two additional slots to add ram in the future.

M.2 drives are solid-state cards that plug directly into the motherboard. These are faster than standard SSD drives and they don’t require any additional cables or power. We keep most of our data on a separate NAS device so this 1TB is plenty of storage.

If you’re only working on photos, you probably don’t need to spend $300 on a graphics card. If you’re ever going to render videos with effects or play video games, the GTX 1070 is still a great all-around option. For a cheaper option check out the 1050ti.

I love this case. It’s relatively small, it’s made of metal, and it has a glass window on the side. For the last build I used the white version, but for this build, I bought the black one.

You will need to choose your power supply based on your computer’s components. Our build only required a 650 Watt power supply.

So far the computer is running well and in our quick Adobe Premiere render test, it actually beat our $3000 PC, rendering the footage around 12% faster.

If you’ve never built a computer before, I highly suggest it. You’ll be able to build a computer catered to your exact needs while at the same time, saving money. If you want to copy my build, feel free with the components above, but if you want to customize your machine at all, I highly suggest using the website PCPartPicker.com to help you find compatible components at the lowest price.

Related tags : Affordable and Build Computer for Photographers The Videographers