I attended the Storage Field Day visit to Western Digital (https://techfieldday.com/event/sfd18/) on February 28, 2019. WD gave us a good taste of their strategy and plans for digital storage and memory. The company discussed solid state and hard drive products as well as their foray into storage system. Speakers said that Western Digital will be 50 years old this year. Some thoughts from that meeting are summarized below with some images of the presentations.

WD’s speakers said that about 75% of the world’s data is generated outside of data centers and more than 36% of the world’s data resides on their products. The company is shipping its 4th generation of BiCS technology (96-layer) with Toshiba Memory Corp (the NAND layer string is made up of two 48 layer stacks). and at the 2019 ISSCC the two companies announced a 1.33 Tb 128-layer NAND flash chip. The two companies use charge trap technology to store the electrical charges that create the memory. The cylindrical confinement in their design allows storing 3-4 bits per cell (see figure below). They commented that by the end of 2019, 3D NAND will be the most shipped semiconductor device of all time. 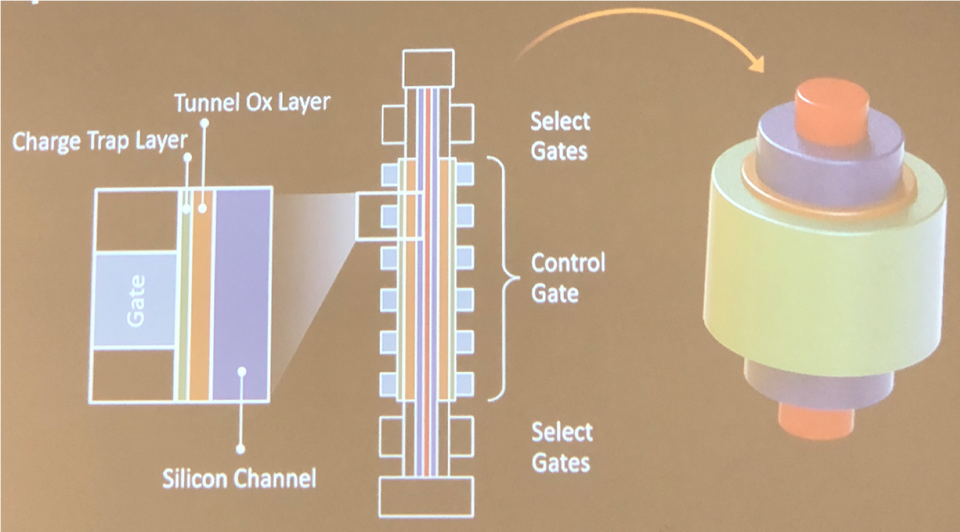 Western Digital showed a chart indicating how different NAND technology nodes scale in cost over time, due to manufacturing maturity as shown below. Their chart shows that for them 96-layer is becoming the most cost-effective memory technology in 2019. 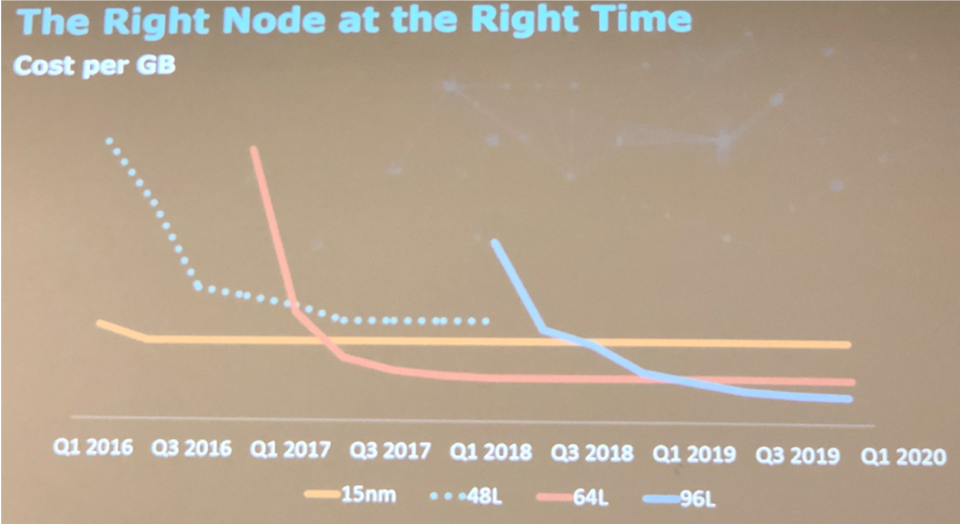 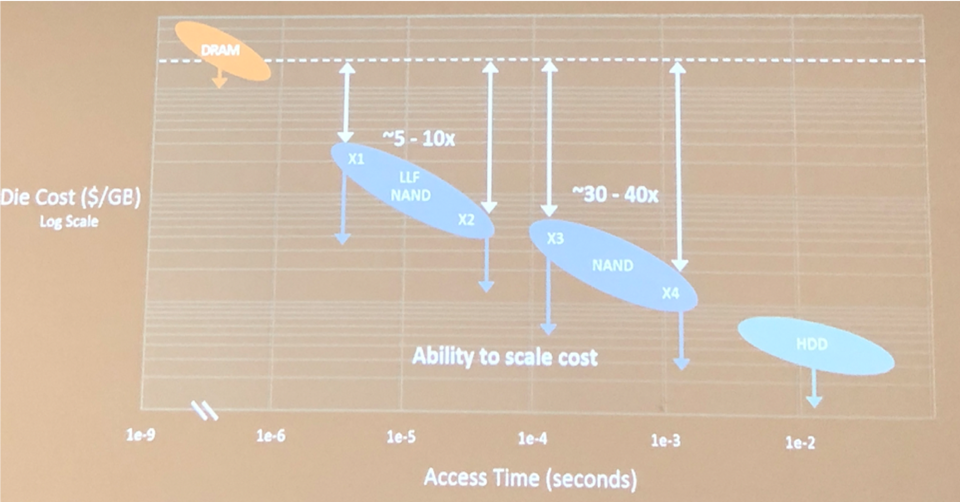 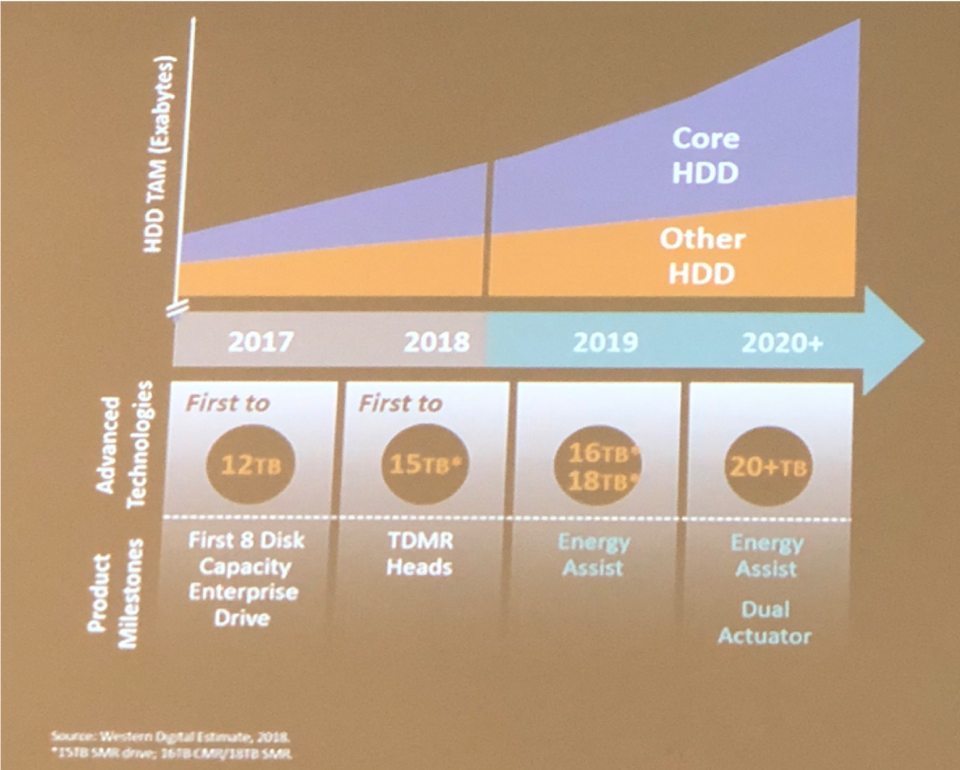 WD also said that they will demonstrate a dual actuator HDD at the Open Compute Project Summit in March 2019 (note that Seagate has said that it will ship a dual actuator HDD for data center applications in 2019). Their overall WD HDD shipment projections show the greatest capacity shipment growth in shingled magnetic recording (SMR) HDDs compared to conventional magnetic recording (CMR) HDDs out to 2023 with a gradual decline in what they are calling low capacity drives. I am guessing that the SMR drives shown in this projection are primarily for data centers. Western Digital sees a near term replacement of 15k and 10K enterprise performance drives by the 2020’s as shown below, although they see retention of a 10:1 advantage on $/TB HDD costs out to 2022 for higher capacity 7200 RPM HDDs. 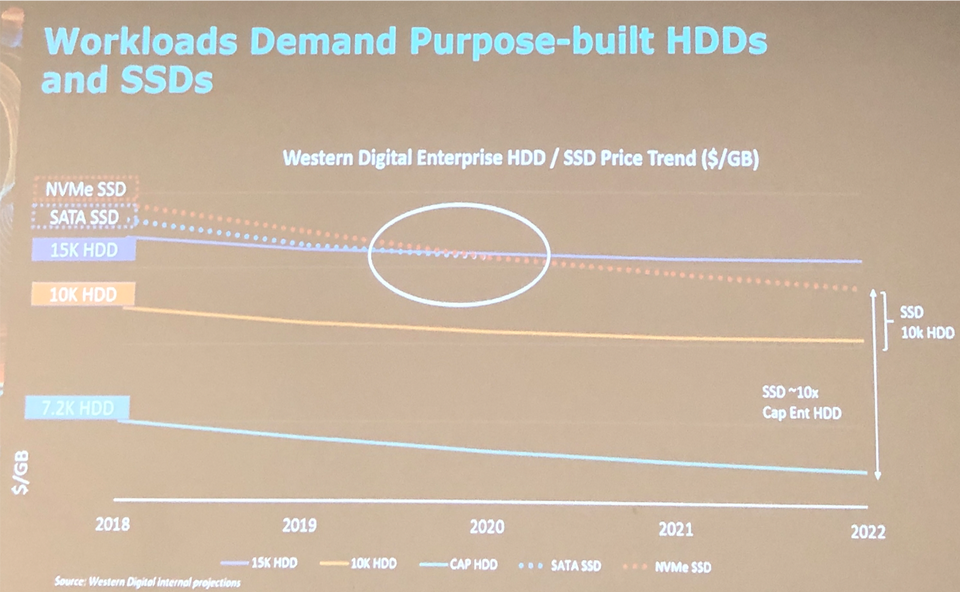 On the storage system side, WD is providing a wide variety of all flash and hybrid storage systems. WD showed projections for data center storage to move from SATA and SAS to NVMe products over the next few years. 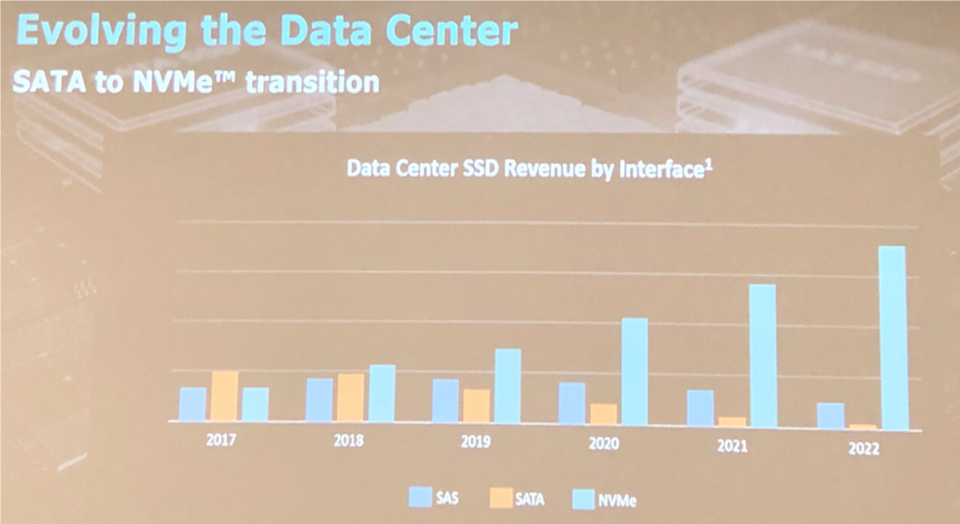 Western Digital took some time to talk about the future of decomposable storage using NVMe over fabric (primarily Ethernet as the fabric) that ultimately could include storage and memory on the same fabric as computation. It has been noted in a previous blog that WD’s OpenFlex platform includes a HDD storage box with NVMe connections on the back end, bringing HDD storage into the NVMe world. 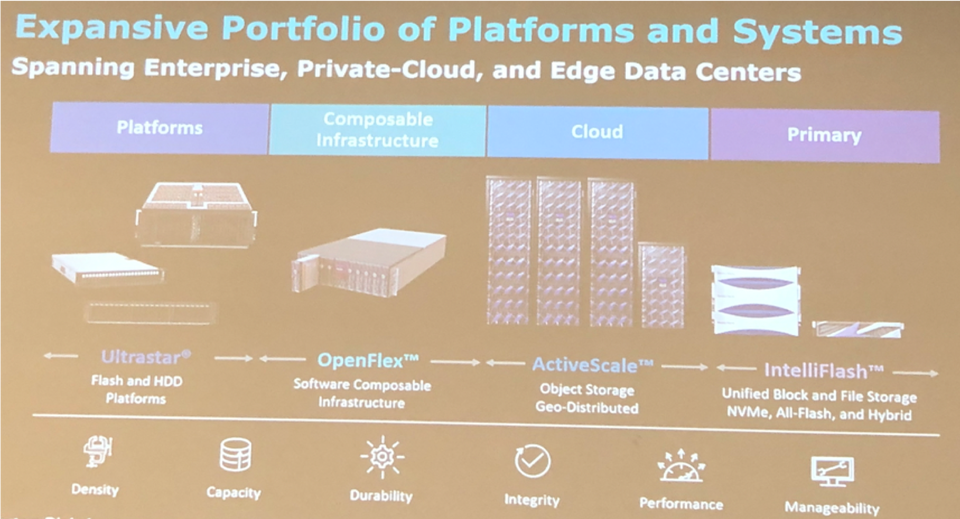 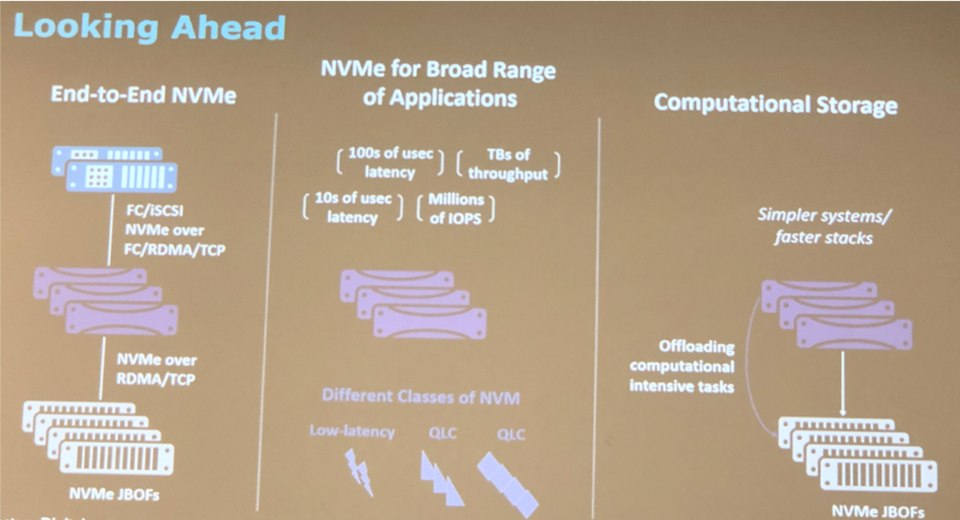 The Western Digital Storage Field Day meeting provided insights on the critical developments to be expected for digital storage and memory and overall computer architectures as we move into the 2020’s.